Finally, I get to review how crappy other peoples' cooking is compared to mine! I was sick at my moms still trying to upload a youtube video at DIALUP speed and was getting super impatient so I text Volk to see what he was doing. He has DSL and lives down the street from my mom. I also wanted to drag him to go see The Shrine and The Bad Apples Blues Band but he wanted to sit at home with his ruca and drink wine like a little wiener. He did offer to sit me at his table for dinner though and since my mom came home from work falafeless, I was beginning to get hungry (read cranky).

So I drive down Katella ave, pass Jizzneyland and the Indoor Swapmeet and turn into Volk's townhouse tract. I enter the octowussy den and am greeted by his stinky little bulldogs Roxy and Frankie. Franky is a French Bull and Roxy is an English one, and they both have the WORST FARTS EVER which is kinda cool I guess, it keeps things interesting. Volk and his heina Christa offer me some fancy red wine but I refuse cause I'm trying to see how long I can go without drinking right now (it's been a week).

They are making a pasta dinner right out of the Trader Joe's Cookbook. Spaghetti with Bruschetta sauce, an Italian Baguette and salad. EVERYTHING PURCHASED FROM TRADER JOE'ZZZZ. The pasta was not undelicious, I'm gonna use that in every review hahaha. The pasta was dead on. When I cook pasta I get really impatient and go play a round of Call of Duty while it's boiling. One round is usually the exact amount of time for pasta to cook but I'll end up losing that round and getting really competitive and play another round then forget that I was cooking pasta. I'll remember 30 min later and have really gross hard crusty pasta for dinner. Volker on the other hand has this crazy device called a KITCHEN TIMER. He must be from the future cause I've never heard of this thing before IN MY LIFE.

The pasta is cooked perfectly and the bruschetta in lieu of sawse is pretty good. I had to sea-salt it up though, I can't taste shit cause I'm still sick. The baguette is from the Trader Joe's bakery which is probably run by Mexicans. I just had to throw a lil racism in there to push the envelope. The bread was really good actually cause Volk hooked it up with the Earth Balance.

Lets talk about Earth Balance. Shit's expensive but it's fucking really good. I recall going to the 99 cent store and getting Fleischmanns margarine and it is the worst crap in the world, but it's 99 cents. Well they sell Nucoa at Raaaaaaalfz on sale for 99 cents from time to time and it is much better than Fleischmanns but still is pretty gross. I mainly use it for cooking. Then there is the vegan Smart Balance with flax seed. I can't stand that crap! It tastes like dirty little Mexican kids rubbed their boners in there. Like the first time they got a boner too. I imagine it going down like this, "Oh man my peto hurts from humping the couch all day, I better put my chanclas on and run to the kitchen to soothe it. Oh what is this? A tub of margarine? Aye Aye Aye this will have to doooooo." Dip. Swirl. "Oh much betterrrrrrrr." Yeah, so Earth Balance is well worth spending the money on. It spreads well, tastes great and is easy to bake with. So back on topic.

Finally the salad. I tend to not eat salad cause it gives me the worst VEGAN BUTTHOLE EXPLOSION (Titchler) but sometimes I crave it. Around Five o'clock it is rush hour in my colon, gridlocked with little wheatmeat cars. Salad is like the tow truck that pulls off the stalled Seitanmobile causing all the traffic on the intestinal highway. So I eat it.

Volk and his ol lady know how to make a legit salad. First off he fries the crap out of some bread to make the croutons. Just olive oil and some garlic in there and the croutons taste perfect. Next Christa drops avocado, carrots and tomatoes on the baby spring mix then tops it off with some BALLSamic Vinaigrette. I'm diggin on it.

Now here comes the rating. 4/5 Plunges on the Clogged Toilet Scale. It can't be a 5 cause no ones cooking but mine gets a 5. Bahahahahahaha. Fuck you pussys, cry about it!

After we eat we watch Legion on netflix instant and I huff dog farts till I fall asleep.

Thanks for dinner dudes!
<3 Throb 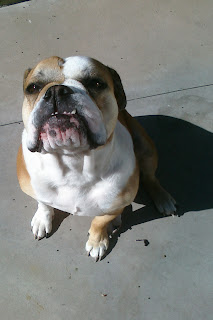 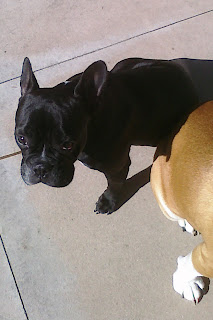 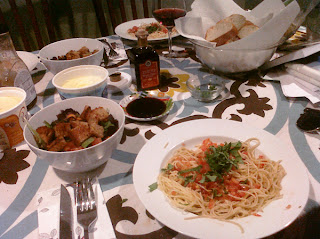 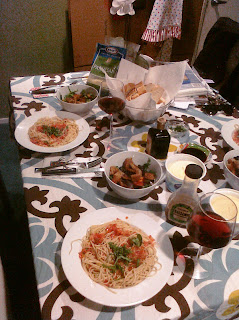 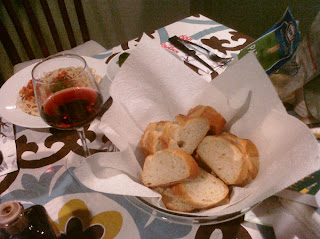