Friday night I was higher than Queen Kong's twat drinking and scarfing pills at Saints & Sinners. I awoke Saturday morning to a horrendous hangover the size of King Kong's shlong. The rumble in my belly was louder than Godzilla's beef. To rid myself of this hangover, some friends and I went to Literati to eat breakfast. I only took photos of what I was eating because the three ladies that accompanied me ordered MEATS.

I got a Bloody Mary minus the anchovy secretions and the Tofu Scramble plate. The Bloody Mary was the same price as my food ($9.00). I asked if they took EBT and they said no :(

I was crazy impressed with the food I was served. The portions were larger than Rodan's brown balls. The Tofu Scramble came with a choice of mixed greens or potatoes, guess what I got? The potatoes were country fried and the scramble had cherry tomatoes, green beans, mushrooms and asparagus. Thumbs up to them for adding the asparagus 'cause I wanted my pee to smell like Cthulhu's snot for the rest of the day. The meal also came with sourdough toast. It clearly says VEGAN Tofu Scramble on the menu but when they brought me the food it came with jelly and BUTTER on the side. Way to go fuckwads.

The Bloody Mary was average, I had to add some pepper and half a bottle of Tabasco to spice it up.

Overall I was very impressed with Literati. I will humbly admit, I did have to poo halfway through the meal 'cause it was a lot of food. Very surprised to be satisfied with this place, it came out of nowhere. 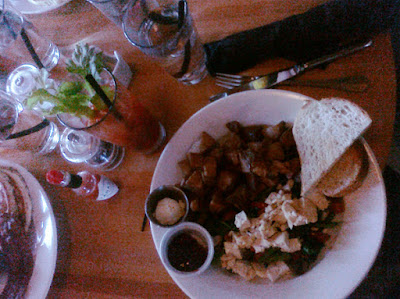 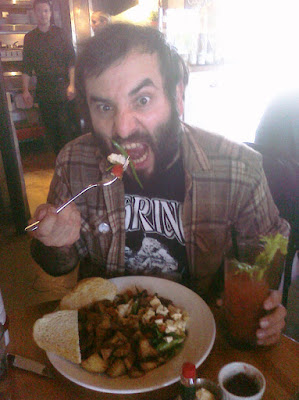