The Shrine was playing a random show in Des Moines. We got to town early and needed to carb hard. I walked into this place across the street from the venue to use the can, while I was waiting I looked at the menu and randomly they had vegan pizza. Well, I knew where I was eating tonight.


This place has tons of regular pizza choices, with strange things like the Taco Pizza with beans and lettuce on top. They have a vegan pizza with Daiya and a choice of 4 toppings. I got the large Saucy Vegan 16 inch thin crust pizza with mushrooms, olives, spinach and artichoke hearts.


When the pizza arrived I was pumped to see it was stacked with toppings. Midwesterner are fat lards, and they don't fuck around with portions. If there ain't an overabundance of crap slopped on their pizza, they will have a fat heart attack. The pizza was decent, it would actually be amazing if they didn't use Del Monte pasta sauce, yes fuckers, I can tell. The least you could do is use Del Monte as a base and spice it up with some sauteed garlic and some other crap, but nope, you lazy Midwesterners are lazy. Other than that the pizza was good.


So I was bragging to the Shrine that I can eat a whole pizza. Which I normally can, but I tried this time and totally failed. There are a few reasons why I can not eat as much as I used to. Drugs and depression knocked down my eating abilities after my breakup with exTina, also being poor as fuck I lost a lot of weight not eating all the time. My bell-bell has shrunk. Once I get a job and make a fuckton of money again I'm sure my gut will stretch out and I can once again fill it with pizza and corndogs and nachos and all the other crap that deserves to be in there.

This place also serves Tiki Drinx. Court got the Blowfish drink, it was pretty gross. 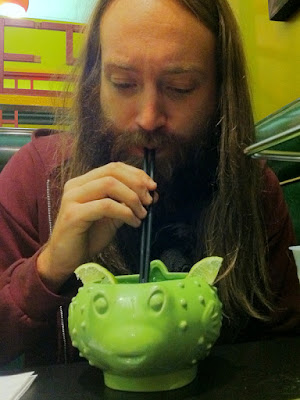 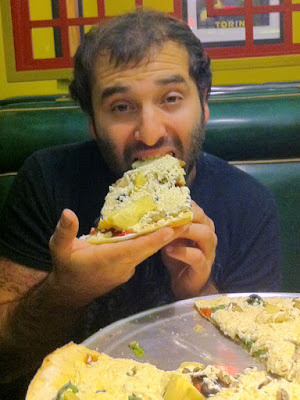