So the Shrine played at the Horseshoe Tavern in Toronto and we all got pretty trashed. This dude Darko let us stay at his place for the night. We all slept on the floor of his studio and he woke us up with eggs and bacon, too bad I'm vegan or I woulda ate the fuck out of that shit. So instead I walked down the street to Sadie's Diner.

Sadie's is a small place off Queens road. It took me a minute to find the place. I got in, sat down and the hottest waitress in the universe took my order. I wanted to go into the bathroom and pound off before I ate but I'm sure it would have been obvious with all the semen dripping from the ceiling.

I ordered the Tofu Scramble which came with potatoes, sausage, toast and a slice of watermelon. I threw the watermelon slice out the window and began scarfing down my feast. The scramble was tasty, it had sun-dried tomatoes in it. The potatoes were a little dry but I drenched them with hot sauce so they tasted pretty good. The sausage looks like it's Worthington brand canned snausage deep fried to sexual perfection. The toast was wheat.

The food was pretty standard for vegan diner garbage, but the price and portion made it totally worth it. I had to get a to-go box which sucked because the waitress probably thought I was a wimp for not eating all my food. Whatever, you can't win 'em all. 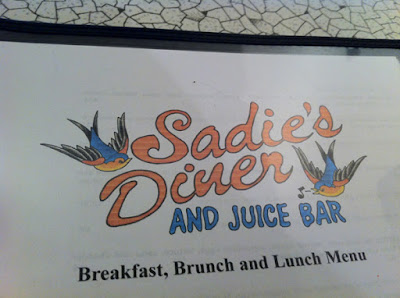 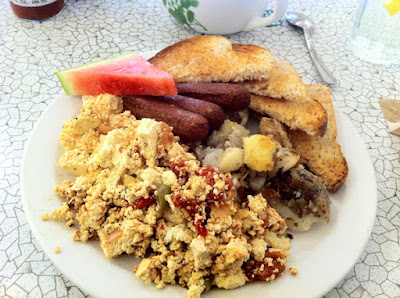 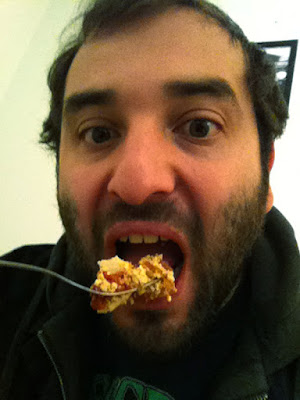