Sup buttholes? The other day I needed pizza. I know you weenies cry like little hungover bitches about pizza but I REALLY need pizza. I have a horrible pizza addiction problem that will make any heroin junkie hand over his needle. I need pizza like a gay man needs cock, I NEED IT! I need it all over my face, I need it in my mouth, I need it inside me all the time. Mike and Raph step aside when the see me walk into the pizzeria.

Cafe Viva Herbal Natural Pizzeria or whatever the internet calls it is a small pizza shack in the East Village. They serve vegan and un-vegan pizzas and a bunch of other crap. It is pretty cramped inside so expect to breath in other peoples gross garlic breath.

This place serves single slices of vegan pizza, they also have whole wheat crust, corn meal crust, spelt crust and some butt crust I left on the folding chair. I have a gluten intolerance, but I still eat the crap out of pizza. I ordered a spelt slice so my stomach and I would not have a samurai showdown in the can later on that night. One slice was called the Seitan Dream, yeah. It had spelt crust, seitan, artichokes, onion and sun dried tomatoes. The other slice had daiya, onions and red peppers. I ate both like there was no tomorrow.

The pizzas here are awesome, definitely one of the best pizza places in New York. I give it 4 out of 5 plunges. Congrats Viva Herbal! 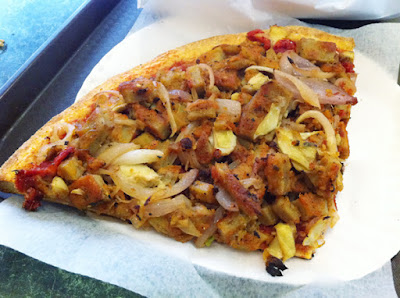 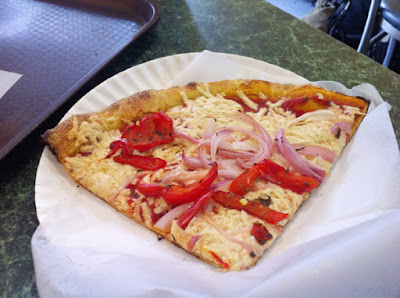 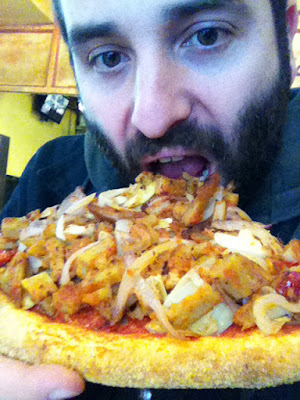