Okay, so this is one of those places that is super hyped up on Yelp, everyone on the internet seems to know the chef personally and raves about how great his butt smells. I hate being on a first name basis with chefs because it makes it harder to talk shit about their restaurants on the internet. I also hate when the chef comes up to you after your meal and asks how it was. My mother told me that if I didn't have anything nice to say then don't say anything at all…until you go home, then talk shit about that person behind their back. So when the chef asks about the deliciousness of their food I always reply,  "It was good," only because I don't want to break their delicate little ego's.

So, while we were in Oahu we spent a day hanging out with Amy. Our original plan was to go to this vegan Dim Sum place, but when we got there a sign on the door read, "Out of business, go eat some ching-chong food somewhere else." We got back in the car and drove across town to Kaimuki to try out this Caribbean spot. Apparently Amy eats there all the time so she knew how to get there pretty fast. We arrived around 3 o'clock and the hostess wouldn't sit us, she said they were switching over to the dinner menu. I found it very suspicious that a large family of BLACK people were seated enjoying their lunch while us single WHITE young adults, well white and asian and mexican, were not allowed to be seated. I'm not one to read into things like this, so I'll leave it at that. The lady did allow us to order food to-go so we did that and drove to a park by the beach to eat lunch.

Melissa got the Jamaican Ital Stew which is a bunch of vegetables mixed with curry and coconut sawce, I got the Tofu Delight which is tofu and vegetables with a tomato coconut sauce. Both items came with rice and bread. Amy got some shredded animal carcass cuz her taste buds are more important than the livelihood of this planet.

This spot gets 3/5 Plunges only because they wouldn't seat us. Next time you see vegans coming into your restaurant you better seat them or else they will talk shit on you on the interneck. 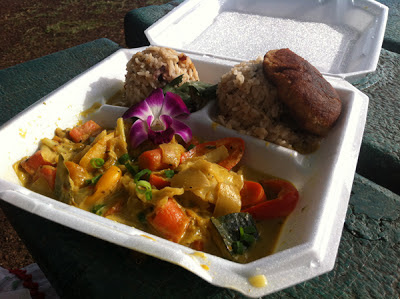 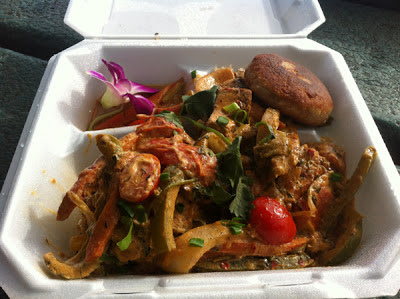 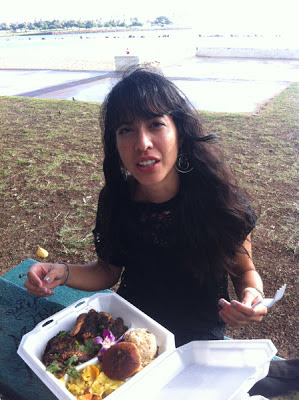 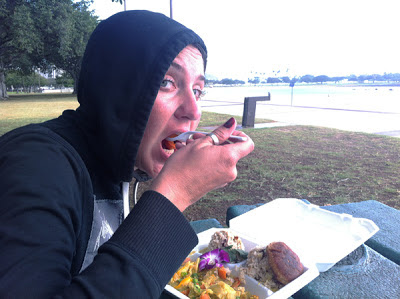 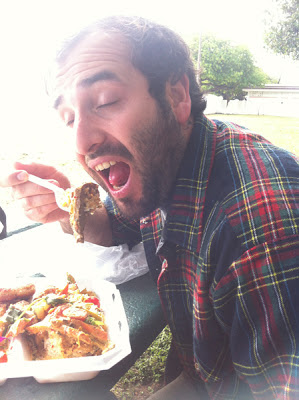