Orale culos, this review is about a small diner in the middle of Chinatown on the island of Oahu. This place serves up a classic list of diner garbage but with a small twist, everything on the menu can be made vegan, well almost everything. Despite this awesome fact, the place is full of hipster turds. Now I'm not here to talk shit about hipsters, in fact if it weren't for hipsters, pretty much every vegan restaurant would be out of business, but this place just reeks of sad hipster cologne. I really don't blame them for coming here, I'm sure the drinks are cheap and they can hang with their buddies who work there, but I really think putting "Bacon and Pabst Blue Ribbon" as a menu item is going a little too far. I also didn't come here to rant about bacon and PBR, but really now, this fad of liking things just cuz it's ironic is retarded. Bacon is disgusting and PBR is quite possibly the worst beer on the planet next to Steel Reserve. All you hipster douchebags fell hook, line and sinker for these marketing ploys. You know PBR and the bacon industry hired hipster PR guys to hype up these horrible products. Question what you put into your bodies people... okay back to the review.

So the chicks working here are easily the hottest chicks on the island. I had to hide my boner the whole time which was really difficult because, it's like 28 feet long you know, with a bazillion throbbing veins and the head looks like a portabella mushroom. Perving out the another reason why skinny moustachioed hipsters come in to this place, I could sit and stare at the bartender's huge forehead all night. Kaipo and Jen ordered unvegan crap, I think Kaipes got the Chili Moco, which would be awesome if it was vegan. In Spanish moco means snot, but in Hawaii it is a dish consisting of a burger patty and an egg smothered in gravy or chili. I want to make this so bad, in fact I'll probably do that today. Jen got some gluten free quesadilla that had chickens or something in it. Melissa got the sampler which was 3 Jalapeno Poppers, 3 Mozzarella Sticks and 3 Buffalo Wings. The wings were vegan so I had some, they were awesome. I got The Carnivore which was a burger with bacon, cheese and grilled onions, but I made it a double decker for 3 bux more, I also got an order of the Volcano Fries.

My food was really dry. The burger, which I believe is Boca, was overcooked. This would have been fine if I had a few pickles to munch on in between bites, but nooope. The volcano fries were decent, but the gravy lacked density. When I eat gravy I want it to stick to my arteries and clog up my heart. I like it brown and thick with tons of pubes and scabs on it. This gravy was very light and runny sort of like a hollandaise sawse. It tasted okay but was definitely not as good as Foodswings. Despite all of this crap I still give this place three plunges, only cuz the chix are hot and they are open late. 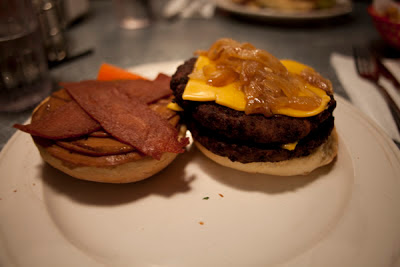 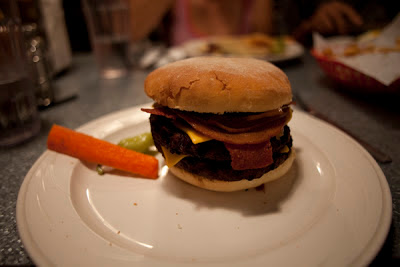 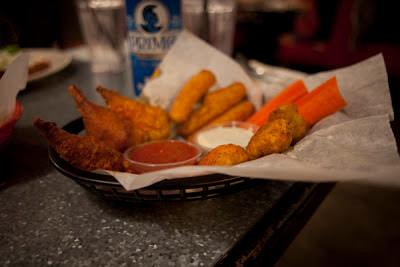 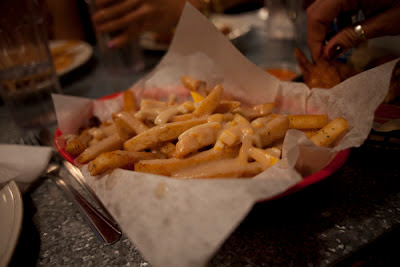 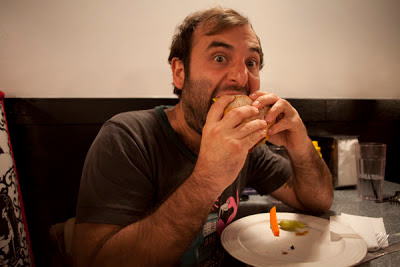 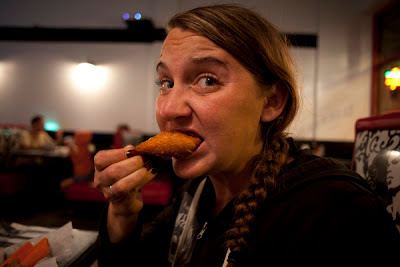 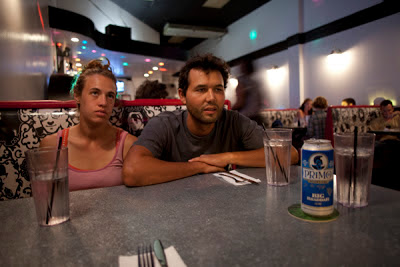